Introduction to life and work 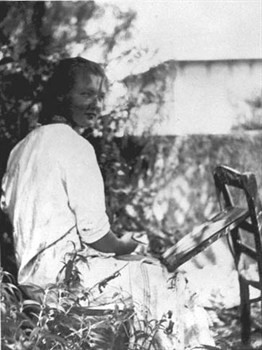 Charlotte Salomon (1917-1943) grew up in middle-class German-Jewish Berlin. As a girl she led a relatively carefree life, until the Nazi coup in 1933. In spite of this she almost completed her studies at Art Academy. In January 1939 Charlotte fled from Germany and went to stay with her grandparents who were living in the south of France. They had quitted Nazi Germany earlier, in 1933. Following the outbreak of World War II, in 1940, Charlotte's grandmother committed suicide. Only then was Charlotte told that her mother had ended her life in a similar way, in 1926.

Charlotte, then 24 years old, came to terms with her turbulent family past as well as her experiences as a Jew living in Berlin, in a most unusual manner. She felt herself faced with a choice: either to end her life or to undertake 'something really extravagantly crazy'. She went into retirement, as it were, and in a burst of wild creative energy, started to paint. So it was that, outdoors in the sunshine of southern France, she produced a series of almost eight hundred gouaches (watercolours).
Between 1940 and 1942, in eighteen months of concentrated work, she painted her life's story, titling it Life? or Theatre?

And she saw with eyes awakened from a dream all the beauty that surrounded her, saw the sea, felt the sun and knew that for a period she must disappear from the human scene and that she had to make every possible sacrifice in order to create her new world from out of the unfathomable depths.

In October 1943, at the age of 26, Charlotte Salomon was killed in Auschwitz.

Life? or Theatre? to Amsterdam 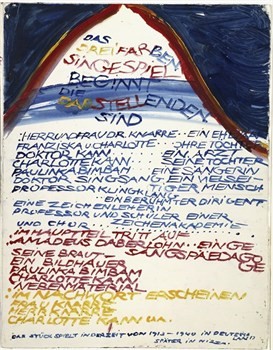 Thanks to Charlotte Salomon's parents, Life? or Theatre? came into the possession of the Jewish Historical Museum in Amsterdam. The total output consists of 1325 gouaches and transparencies. Many of these were rejected by Charlotte herself, and what developed was a numbered series of around eight hundred paintings.

Life? or Theatre? is divided into acts and scenes much resembling the form of a musical comedy. The piece is clearly structured like a play, having a prologue, a main section and an epilogue. Together with a list of the cast, this is announced in the first gouaches of Life? or Theatre?. Charlotte painted these introductory pages of her three-part Singespiel in the three primary colours. Blue was for the prologue, red for the main section and yellow for the epilogue.

The prologue deals with Charlotte's early years in Berlin, up until 1937. The main section concerns her great love, the voice teacher Alfred Wolfsohn, and his relationship with both Charlotte and her step-mother, the opera singer Paula Salomon-Lindberg. The epilogue describes Charlotte's years in the south of France, from 1939 to 1942. 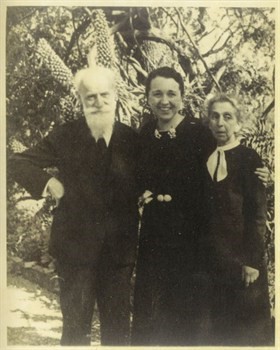 During the summer of 1942, at the hotel where she was staying in St. Jean Cap Ferrat, Charlotte Salomon laboured day and night to complete her work. When it was finished she entrusted Life? or Theatre? to the care of Doctor Moridis at Villefranche sur Mer, with the words,'C'est toute ma vie' (it's my whole life). After the war, the doctor presented the paintings to Ottilie Moore, to whom they were dedicated. She was an American woman who had offered a home to Charlotte and her grandparents in her villa in Villefranche. In 1947 Ottilie Moore in turn gave the gouaches together with a self-portrait of Charlotte to her parents, Albert and Paula Salomon, who had, incidentally, no idea of the existence of this work.

Albert and Paula had five boxes made, lined with cloth, and there the paintings remained for more than ten years. In 1959 they called the attention of Amsterdam's Stedelijk Museum to the series, and in 1961 the museum mounted an exhibition of the work. This signified the start of a spate of exhibitions and publications presenting Charlotte Salomon's Life? or Theatre?.

On 20 November 1971 Albert and Paula Salomon donated the series comprising around 1300 gouaches to the Jewish Museum of Amsterdam.

After Life? of Theatre? 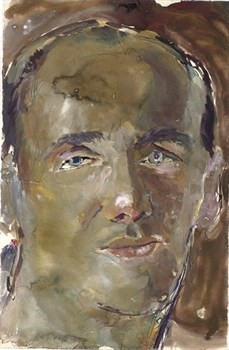 Life in France became increasingly hard as the Second World War dragged on. Food was scarce and grandfather Grünwald grew very weak. He died in Nice and was buried on 12 February 1943.

Meanwhile the situation in the south of France had grown very grim for Jews. Charlotte was greatly comforted by an Austrian Jew, Alexander Nagler, who was also a refugee in France. On 17 June 1943 they were married in the town hall of Nice. But the wedding was to prove their undoing, because it meant they had to officially register as living there, and this information got through to the Nazis. On 24 September 1943, Charlotte, just four months pregnant, and her husband, were arrested by the Gestapo. Immediately on arrival in Auschwitz on 10 October 1943, Charlotte was killed. Her husband Alexander died on 1 January 1944 as a result of exhaustion caused by forced labour.

Previously, Charlotte's father Albert and his wife Paula had fled to Amsterdam in 1939, initially planning to escape to the United States. They hoped to be reunited there with Charlotte. But in Amsterdam they were arrested and all their possessions were burned, including letters from Charlotte. They were sent to Westerbork concentration camp in the north of the Netherlands, but they managed to escape and went into hiding. When the war was over they continued living in Amsterdam. Albert Salomon got a job as a surgeon and Paula worked as a voice teacher at the music conservatory. Albert died in 1976, while Paula lived to be 102 years old, dying on 17 April 2000.

Alfred Wolfsohn left Berlin in 1939 and fled to London where he joined the British army as a volunteer. After the war he worked with pupils developing a voice training method that was a combination of psychotherapy and singing training. His theories are still being taught at the Roy Hart International Voice Centre, started by Roy Hart, one of the most promising pupils of Alfred Wolfsohn..

Wolfsohn met Paula and Albert Salomon for the first time after the war in Amsterdam in 1947. At that point they were not aware of the work Life? or Theatre? that Charlotte created. Wolfsohn died from tuberculosis in 1962 at the age of 65. Only a year before his death did he find out about the enormous influence he had had on life and work of Charlotte Salomon. 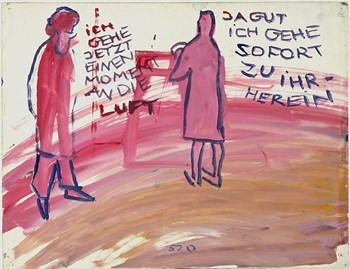 Charlotte Salomon prefaces her work with a series of gouaches in the form of a theatre programme. Following a prelude, she introduces the protagonists with names whose sounds or meanings say something about them. By giving the work the form of a music theatre piece, she takes artistic licence in her representation of people and events.

The gouaches are painted in a free manner. There are no contour lines, indeed, jagged lines often zigzag across the pictures. The palette is bright and colourful. Interestingly, the colours used in the work consist only of the three primary tones and white. Although every shade can be produced from the primary colours it is most unusual for an artist to use no other tones, or indeed, not to buy readyrnade paints. It isn't clear whether Charlotte adopted this strategy out of sheer necessity or whether it was a discipline that she imposed upon herself.

Charlotte's style changed as her work progressed. Early on, she paints detailed narrative scenes using bright colours. These give way to roughly sketched pictures representing certain moods. Towards the end, the brushstrokes become more and more rapid as if Charlotte knew that her time was running out. One thing remains unchanged: she continues to depict a character using only a few swift lines. With a mixture of warmth and aloof observation Charlotte portrays herself, her family and the people she loves. The stance of grandfather Knarre suggests something of his inflexible attitude, while she almost always portrays the seductive Paulinka, a famous singer, with a double chin. 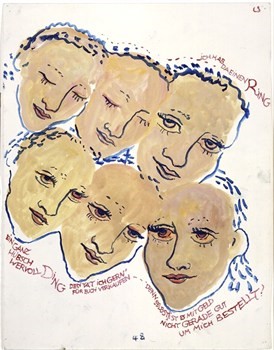 Charlotte's work appears to be strongly influenced by films. Indeed, this type of visual representation suited her character very well. She was a quiet, reserved person, but possessing an almost perfect visual memory. Ever on the alert, she registered everything she saw. Also, she was growing up at a time when the film was blossoming from black-and-white silent movies into a medium using colour and sound tracks. Charlotte's great inspiration Wolfsohn (Daberlohn) had his own ideas about this new medium, which Charlotte remembered accurately. In one of her paintings she has Daberlohn saying, 'People first have to explore their own inner beings before they can venture outside themselves. Myself, I find the film an extremely useful means of getting outside myself, it's a manmade machine that manufactures a person's own ego.'The film is the means by which modern people can sound and explore their hidden depths and thereby gain understanding and healing.

Life? or Theatre? looks very much like a storyboard for a film. There are such elements as several shots in one picture, with sudden close-ups and the camera zooming in and out in succession. Often one sheet presents several 'talking heads' with their words painted beside thern, and this is reminiscent of cartoon films in which the characters indulge in lengthy monologues, with ever-changing facial expressions. 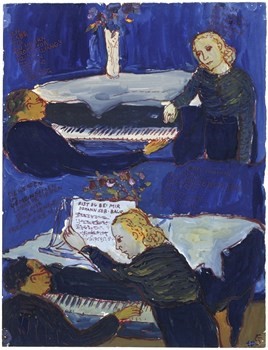 As well as having a remarkable memory for both the spoken and the written word, Charlotte had a prodigious musical knowledge. Apparently she would hum melodies in her head while she was painting or writing. Her work is crammed with references to operas, songs and popular tunes. There are certair recurring melodies in her work. Excerpts from Bizet's Carmen appear as background music to scenes featuring Paulinka and Daberlohn, and the story of Paulinka is accompanied by the music of Bach. Charlotte and Daberlohn appear on the scene they are accompanied by Schubert's Der Tod und das Mädchen (Death and the Maiden). Charlotte sometimes uses music, just as in films, to heighten the mood and emphasise the emotion of a scene. At times she does the reverse: she selects music that is the opposite to the atmosphere being illustrated, thereby giving the scene an ironic twist. When Daberlohn, small and weak, joins the mighty Herr Singsang, we hear the victory song from Carmen. With comical undertones, this dramatic presentation accentuates Daberlohn's inflated image of himself.

Charlotte was introduced to music by her step-mother, Paula Salomon-Lindberg (1397-2000) who was famous for her performances in operas, and for singing Bach. Paula trained between 1926 and 1930 as an alto at the Berlin music conservatory where her teachers included Siegfried Ochs (Dr Klingklang). She appeared as a soloist in many concerts under such famous conductors as Furtwängler, Walter and Klemperer and also sang with the Social-Democratic Volkschor. With the Nazi rise to power in 1933, however, Jews were forbidden to perform in public. Paula then worked for the Jüdische Kulturbund, Jewish Cultural Society, in Berlin, together with Kurt Singer. She performed as soloist in several of Handel's oratorios.