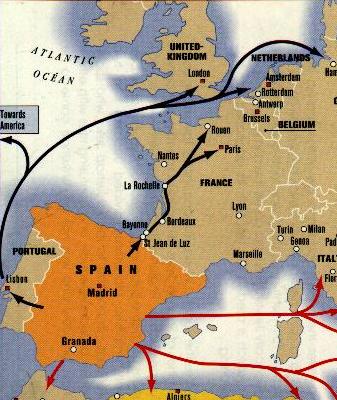 The first Jews to settle permanently in the Netherlands were descendants of Spanish and Portuguese Sephardic Jews or Sephardim. Their migration was triggered by a series of dramatic changes in the Iberian Peninsula, where they had lived for centuries in uncertain conditions. In 1492 the Spanish Jews were hounded by the Inquisition and had to choose between converting to Catholicism or leaving the country. Many fled to Portugal, but in 1497 they were forced to undergo mass baptism after all. Both in Spain and in Portugal, some of these “converts” continued to practice Jewish rituals secretly at home, while living as Catholics in the eyes of the outside world.

In 1536 the Inquisition was established in Portugal too, and it kept a close eye on the Jews who had been forcibly baptized. Many decided to flee, migrating to countries including Brazil or France. Over fifty years later, some of their descendants came to the Dutch Republic as merchants, settling in Amsterdam

Portuguese Jews before the building of the Esnoga

Members continued to communicate in Portuguese, while Spanish was the language of culture and scholarship. Few of the newcomers knew Hebrew, so rabbinical approval was granted for services to be conducted in Portuguese. This made it easier for people to return to Judaism. Hebrew prayer books eventually replaced the Spanish translations.

The Portuguese Jewish Congregation kept in contact with fellow religionists in Lisbon, Bordeaux, Bayonne, Hamburg, London, and later also in Brazil –in many cases through relatives. The Amsterdam Jewish community set an example for those forming elsewhere, such as those who left Amsterdam – or Brazil – to settle in New Amsterdam, Suriname, St Eustatius, and Curaçao.

The Portuguese Jews were major players in the Netherlands’ cultural and economic development and loomed large in Jewish history. The congregation produced rabbis, scholars, theorists, artists, bankers, and founders and managers of leading international trading houses. Their luminaries included the celebrated philosopher Baruch Spinoza, who was excommunicated by the congregation in 1656. Historians dispute the reasons for his banishment, but the prevailing view is that his ideas conflicted with those of the rabbinate. 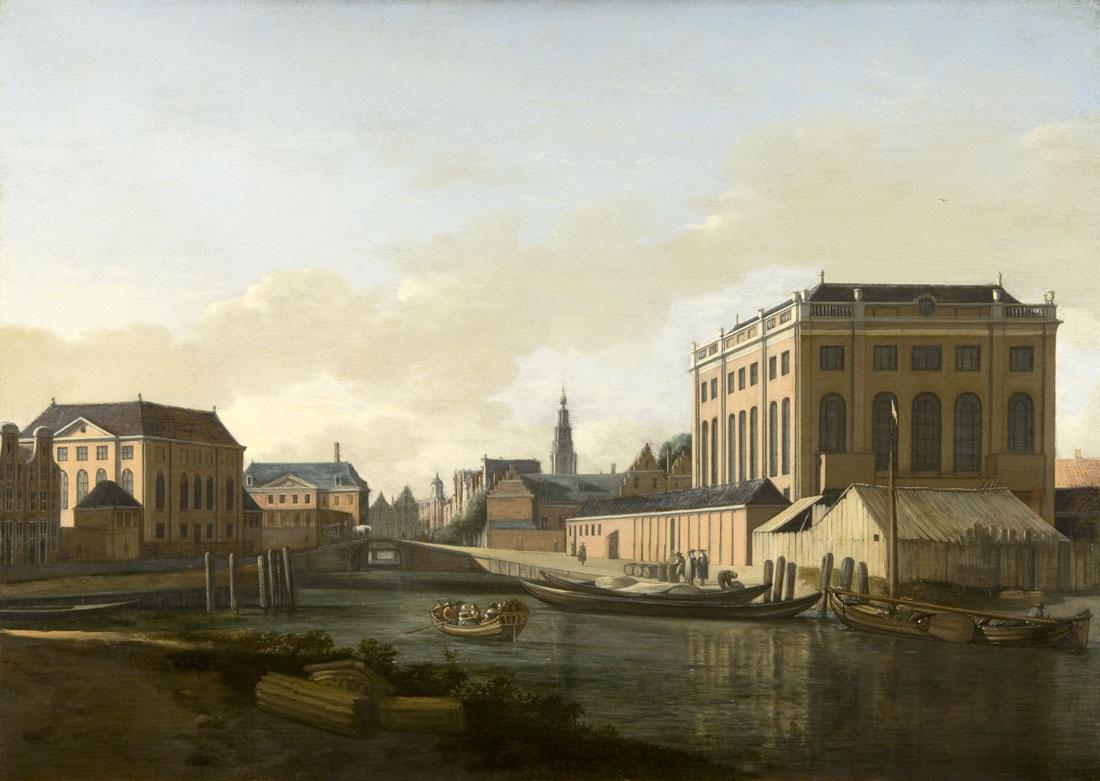 The Building of the Portuguese Synagogue

Inscribed above the main entrance, in gilded Hebrew letters, is 1672, the year in which the complex was to have been finished. In fact work was halted at the beginning of 1672, the “Year of Disaster,” until May 27, 1674. The text is taken from Psalm 5, verse 8: “In the abundance of Thy lovingkindness will I come into Thy house” (“Bishenat va'ani berob chasdecha abo beetécha lif'k”). In accordance with Jewish tradition, certain letters are marked to form a perat katan, signifying the year. In addition, the letters of the final few words contain the name Aboab, after Chacham Aboab, whose initiative it was to build the synagogue. The festive consecration of the Esnoga took place on August 2, 1675. 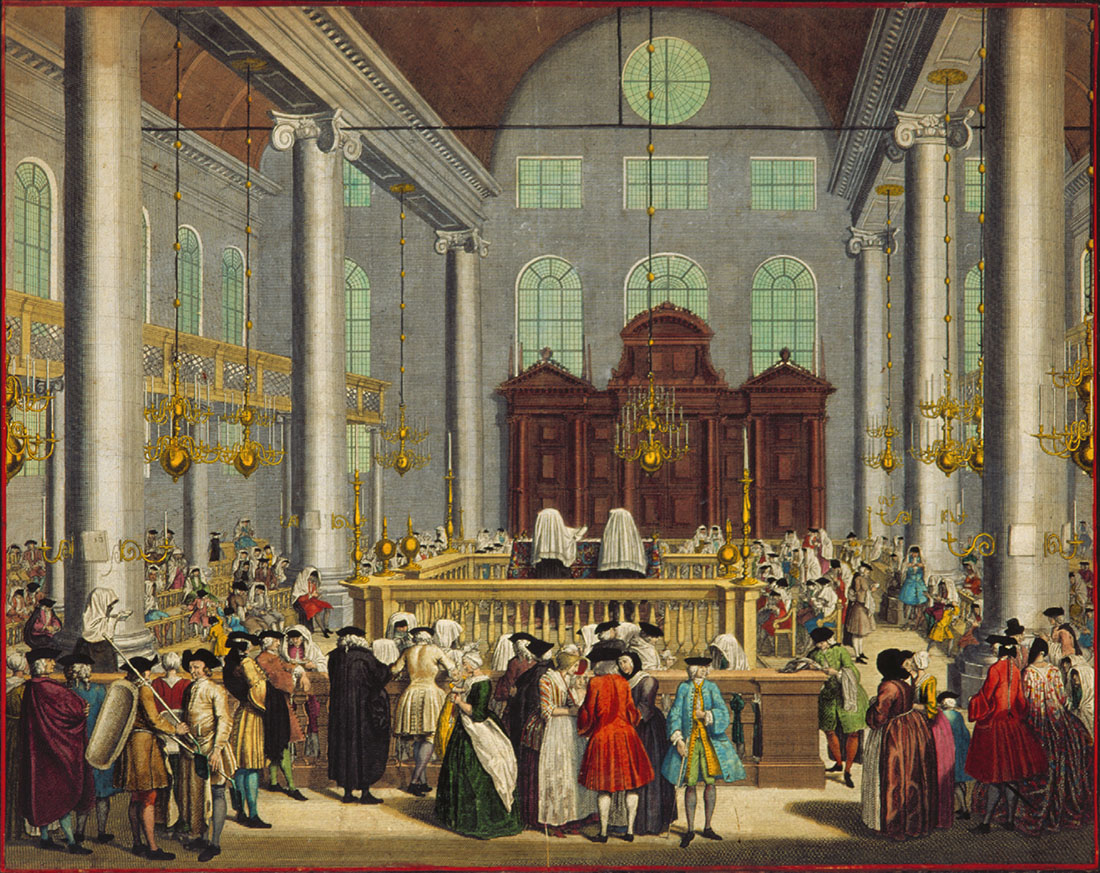 The annexes of the Portuguese Synagogue contain the library Ets Haim–Livraria Montezinos. The world’s oldest functioning Jewish library is part of the seminary of the same name, which was founded in 1616 and has been located in this complex since 1675. Its 30,000 printed works and 500 manuscripts embrace all aspects of Jewish studies, and also include works of literature, history, and the natural sciences. The collections are part of the Sephardic cultural heritage, originating from Spain and Portugal.

In 1998 the State Secretary for Culture incorporated the collections of the Ets Haim Library in their entirety into the list attached to the Conservation of Cultural Heritage Act. In October 2003 UNESCO added the collections to the Memory of the World Register, thus acknowledging their universal importance.

Over the centuries the Esnoga’s annexes fulfilled diverse roles in the everyday and religious life of the Portuguese Jewish community. They are still furnished as far as possible in the original style, with the furniture and other heritage that the Congregation has preserved for centuries, and they are largely open to the public. These buildings once housed the congregation’s historical secretariat and archives, the boardroom, the seminary auditorium which was converted into a winter synagogue in 1959, the office of the Rabbinate, the areas for hand-washing and the ritual washing of the deceased (taharah), the candle room, and the Tabernacle (cabana/sukkah).

Most of these rooms have permanent exhibitions focusing on various historical and topical aspects of Jewish life from a Portuguese Jewish perspective. An audio guide provides visitors with more information about the rooms’ original uses. The complex also contains the mikvah/ritual bath, the kosher kitchens and the world’s oldest functioning Jewish library, Ets Haim. Some parts of the annexes are still used by the Portuguese Jewish Congregation.

At the beginning of the Occupation and the persecution of the Jews by Nazi Germany in 1940, the Dutch Jewish community numbered about 140,000, over half of whom lived in Amsterdam. Roughly 4,300 were Sephardim. Unlike the Ashkenazi synagogues, the Esnoga survived World War II. Thanks to the efforts of local people, the synagogue’s status as a historic building, and a great deal of luck, the Esnoga retained all its original  seventeenth-century features and collections. Its first use after the Liberation was on 9 May 1945, when Jewish survivors held a service there. After the war the Jewish community in the Netherlands numbered just 20,000, roughly 800 of whom were Sephardim. 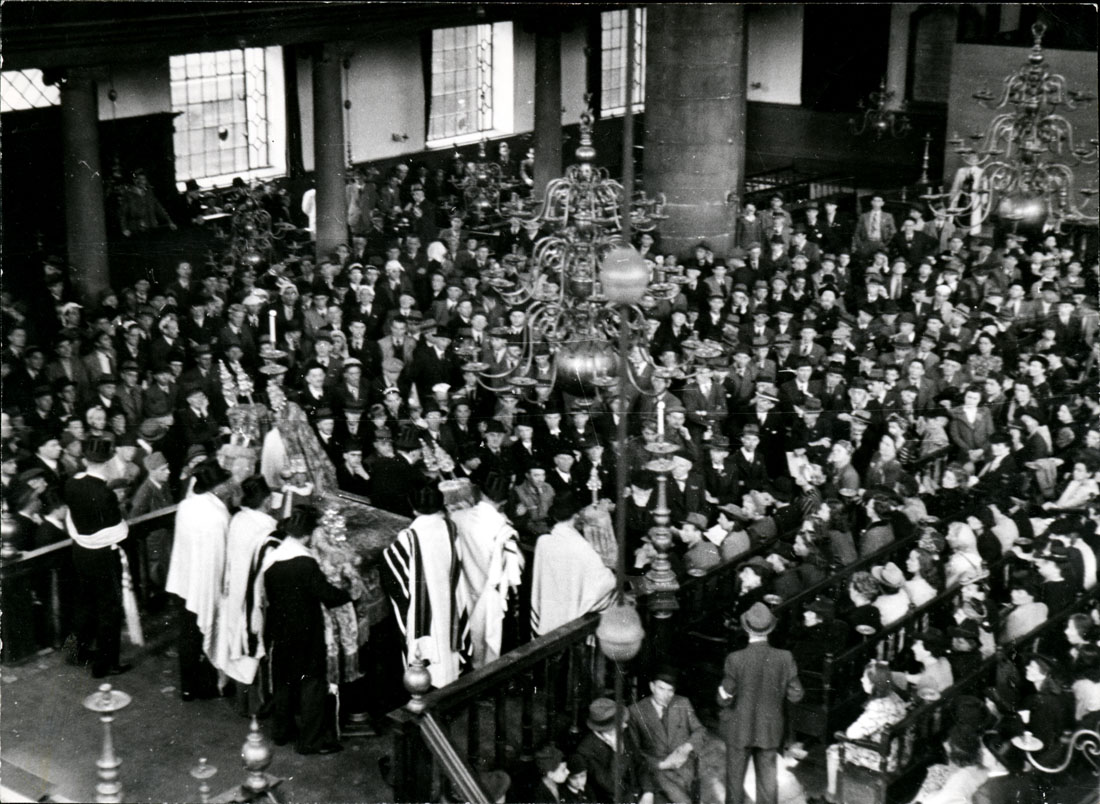 Renewal: Back to its Origins

All elements of the Esnoga and the annexes that are monumental in nature were renovated and restored between 2011 and 2012, which involved the removal of all inappropriate additions and paneling.

The main building has undergone high-quality restoration of its façades, roofs, cast iron window frames, and sandstone decorations. Some restoration work was also conducted on the roof structure. The result is a seventeenth-century complex and courtyard that are open to the public. The Esnoga itself, its interior unchanged over the centuries, exudes the Zeitgeist of the seventeenth century. Intimidating in its vastness, serene in its peacefulness, magical in its function, and with a history that is both emotional and awe-inspiring, the synagogue leaves no visitor unmoved. 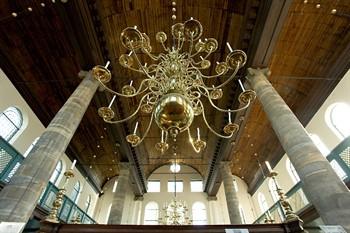 For "Esnoga Quest", an educational program on offer to schools and families visiting the Esnoga, a short video was made about the history of the Portuguese Jews in Amsterdam. 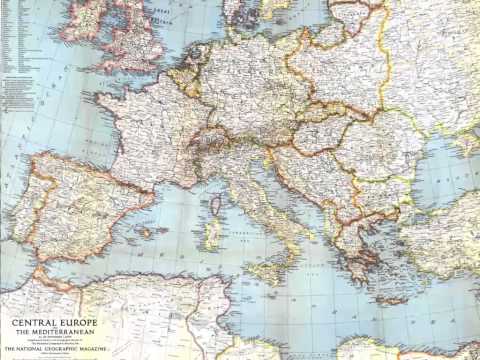 Renewal: Back to its Origins

All elements of the Esnoga and the annexes that are monumental in nature were renovated and restored between 2011 and 2012, which involved the removal of all inappropriate additions and paneling.

The main building has undergone high-quality restoration of its façades, roofs, cast iron window frames, and sandstone decorations. Some restoration work was also conducted on the roof structure. The result is a seventeenth-century complex and courtyard that are open to the public. The Esnoga itself, its interior unchanged over the centuries, exudes the Zeitgeist of the seventeenth century. Intimidating in its vastness, serene in its peacefulness, magical in its function, and with a history that is both emotional and awe-inspiring, the synagogue leaves no visitor unmoved.

The Esnoga shares with the synagogue in Prague the distinction of having maintained their original function as synagogues for the longest time. Furthermore, it is extremely rare that the present-day interior largely dates from the time when it was built and has been preserved intact, including its brass chandeliers and candle holders. The Esnoga’s interior has never been adapted to modern times. It has no heating or electric lighting, and is illuminated instead by almost 1,000 candles.