PRIMO is a moving play based on the Italian-Jewish chemist and writer Primo Levi’s (1919-1987) memoir If This Is a Man (1959) and his experiences in the Auschwitz death camp during the Second World War.

‘Even during my imprisonment, despite the cold and hunger, the beatings, the hard labour, the death of one companion after another, the overwhelming nature of each and every hour, I had felt an intense need to write of what I was living through. I knew that my hopes of salvation were minimal, but I also knew that, were I to survive, I would have to tell my story, that I would not be able to do otherwise. Not only this, but telling this story, bearing witness, was a reason for staying alive. Not to live and tell, but to live in order to tell. Even in Auschwitz I realized that I was living the fundamental experience of my life.’ (From: The Black Hole of Auschwitz, 2005)

The work premiered in Italy in 2014 and has since had successful runs in Poland, Austria, Russia, Germany and the Czech Republic.
PRIMO is an initiative of the Swedish-Danish actor Jacob Olesen | Director: Giovanni Calò | [Actor: Jacob Olesen |]Producer: Enrico Carretta 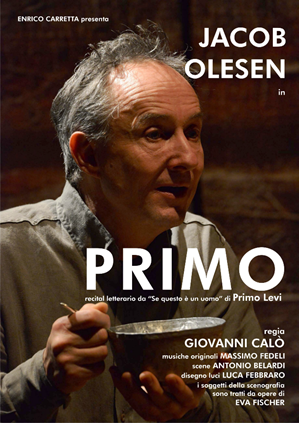